I see an "Unexpected Error" in Tableau when I do Update Now. Print

When you press Update Now and see the following error,  don't worry, it is simple to fix. 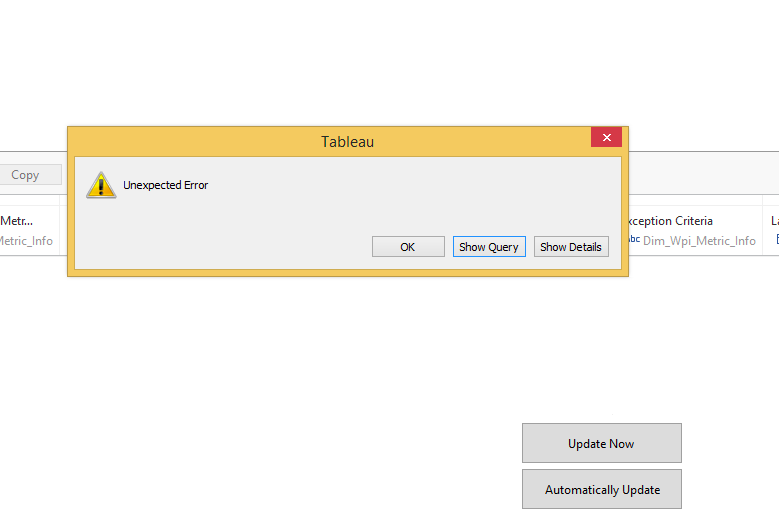 This unexpected error is most likely due to error returned by OBIEE.   It could be due to two reasons:

2. Another possible root cause for this error is due to errors in RPD for one or more columns in the selected tables. To resolve this error, you should try and remove unwanted columns and then doing a "Update Now".

However, as a best practice, we recommend that you do not use "Update Now" when connecting to OBIEE for a few reasons:

1.  When you do an "Update Now" without any filters, Tableau would send a Select * query to the fact table and dimension tables which could result in an expensive and slow query.  This will query all the columns and the entire data.  So, always use filters to limit the data being queried.

2.  When Tableau sends a Select * query, if your OBIEE RPD has errors in one of the columns in the selected tables, the Update Now will fail.  OBIEE RPD could have errors such as "missing physical mapping" for some columns which are not used.  But since Tableau is querying on all the columns in a Table/Folder, the query will fail in OBIEE.   So, you should choose only a small number of columns for your query and hide the unwanted columns.  Then Tableau will query only the required columns in the table.